Music in motion, ballet on horseback, art... Dressage is at its most basic level a specialized discipline or style of riding which enhances the horse's natural gait to create a beautiful, pleasing picture. It's roots are in the highly developed systems of training and testing created for cavalry riding. Using a long, patient system of training and natural muscle development the horse and a strong partnership with rider, dressage appears as elegant and effortless partnership. Dressage is currently the fastest growing equestrian sport in the United States. Classical riding principles are the foundation on which dressage was built. The evolution of the relationship between humans and horses has been ongoing for over 6,000 years and has developed from a basic necessity into a cherished art form as well as a competitive sport.

Riding As An Art 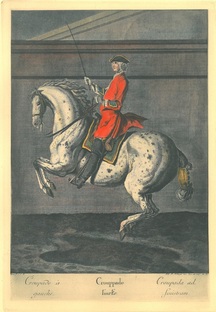 Like many of our modern forms of artistic expression (opera, ballet, painting) classical riding gained its foothold during The Renaissance. By the 16th century the use of gunpowder and firearms became the dominant weapons used in battle, while horses were still needed in cavalry the heavily armored medieval knight and his similarly protected Great Horse became a relic of the Early Middle Ages. Horses became a symbol of high rank and status and every nobleman engaged in the new study of horsemanship. To be able to pursue horsemanship as an area of study it was necessary for schools to be developed. Most European countries established not only their own stud farms, but also founded their own riding schools. The greatest of these early Riding Masters was widely acknowledged to be the Frenchman Francois Robinchon, Sieure de la Gueriniere, a student of the French School of Riding. Gueriniere maintained that "without theory all practice is aimless" and in 1733 he published his great work: Ecole de Cavalerie, School of Cavalry. The Spanish Riding School in Vienna (home of the Lipizzan horses) quickly adopted Gueriniere's teachings as holy writ and still to this day practice the traditions set down over almost 300 years ago.

Today there are still four classical riding schools in Europe: the Spanish Riding School in Vienna, Austria; the Cadre Noir in Saumur, France; the Royal Andalusian School of Questrian Art in Jerez, Spain; and the Portuguese School of Equestrian Art in Lisbon, Portugal. All of these schools practice the classical art of riding as it was laid forth during the Renaissance. here at the Tempel Lipizzans, we also practice this ancient art in the style of the Spanish Riding School 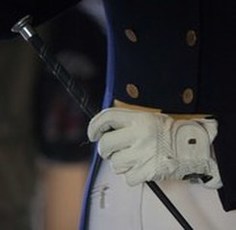 Since Dressage first appeared in the Olympic games in 1912 this equestrian sport has been gaining popularity in the United States. In 1973, the United States Dressage Federation (USDF) was founded and continues to be the governing body of the sport in the US. In a dressage test, the horse and rider are judged on how well they perform a series of prescribed movements that include circles, figure eights, pirouettes and lateral (sideways) movements. The scores are based on suppleness, flexibility, and regularity of the gaits; smoothness and correctness in the movements; precise and prompt obedience to the rider's aids; and the degree to which the gaits display both impulsion and balance. Each movement is scored and all the movements are added to yield a total score for the test, which is converted to a percentage. First place is awarded to the horse and rider combination with the highest score/percentage.
​
There are nine levels in dressage. The lowest levels start with the most basic movements: walk, trot, canter on straight and curved lines. The highest levels truly demonstrate the suppleness of the horse and the rider's subtle control over their mount. Like any human athlete, not every horse will become a Grand Prix horse destined for Olympic competition, but every horse, regardless of its size, breed or ultimate use, can benefit from dressage training. The horse will become stronger, more flexible and well balanced, not to mention more confident and attentive, ultimately achieving an almost perfect unity with the rider.