THE HISTORY OF THE LIPIZZAN BREED

The Foundation of the Lipizzan Breed 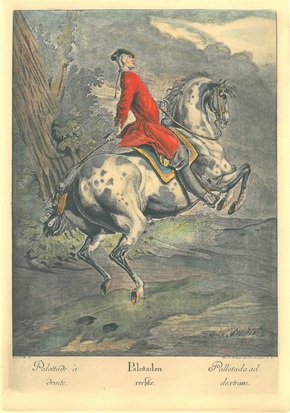 ﻿The Lipizzaner horse is one of the oldest breeds in Europe. The breed got its start in 1580 when Archduke Charles of the Austro-Hungrian Empire established a stud farm at Lipizza near the Adriatic Sea in modern day Slovenia. This occurred shortly after his brother, Maximilian II, had imported Spanish horses to Austria and founded the court stud at Kladrub. It was from the stud farm at Lipizza that the breed gets its name. Archduke Charles greatly desired to create a horse that was not only suited for war, but also for pulling carriages and performing in the manner of classical riding. The Renaissance had brought with it a rejuvenation of classical art and horsemanship was no exception.Riding was raised to an art form and became a necessary area of study for any nobleman. It was widely acknowledged at the time that Spanish horses were the best suited for classical riding. Their beauty, elegance, and strength made them an ideal partner. Using Spanish horses and the local Karst horses the Austrian-Hungarian Empire steadily developed the Lipizzan breed through the 17th and 18th centuries. During the reign of Leopold I the breed standards were established. The most well-known feature of a Lipizzaner is its iconic white coat, which was chosen because it was thought to best represent the imperial house. Another well-known feature of the Lipizzan is its Roman nose; this is where the profile of the head is slightly convex. The result of this extensive, careful breeding was a horse that was not only beautiful to look at, but strong and athletic as well.

At roughly the same time as the breed was being developed in Lipizza the Spanish Riding School was getting its start in Vienna. The school was founded in 1572 and to this day it is world renowned for their preservation of the art of classical horsemanship. It takes years for horse and rider to achieve the movements of the Haute Ecole or High School. Movements such as pirouettes, piaffe, and passage are achieved at the highest level of training and bring to mind the grace and coordination of a ballerina. These horses performed for emperors and kings and were highly valued the world over. 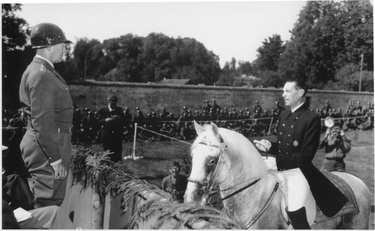 Colonel Podhajsky requesting assistance from General Patten and the US Military.
In March of 1938 the Anschluss put Austria under German control. Every aspect of Austrian life was threatened. The Lipizzans were no exception. Nazi Germany required that everyday life continue as normal and therefore the Spanish Riding School must continue to give performances during the first few years of the Anschluss. Not only were the stallions in Vienna threatened, but the majority of the royal herd located in Piber was in grave danger of losing its unique bloodlines. In 1942, the royal stud farm in Piber was converted into a facility to breed pack animals for the Germans and the Lipizzans were evicted and transported to Hostau, Bohemia (modern day Czech Republic).
As the war went on, the threat of air strikes became a real danger to the Lipizzans at the Spanish Riding School. It became apparent that they would have to evacuate from the city. Under direction of the chief rider, Colonel Podhajsky, the Spanish Riding School was finally evacuated in February of 1945 to the Castle of Count Anton Arco Valley in Saint-Martin in northern Austria. It was the first time since 1572 that the School had left the capitol.
The stallions remained safe at Saint-Martin where they were tucked away from prying eyes and out of reach of all combat zones. The remainder of the herd, some 350 horses, which was housed in Hostau was not so safe. In April of 1945 the Germans had been driven out of Hostau, which then went under Russian Control. The town was positioned right between the advancing Soviet and US armies. The soviet army was starving and it was not uncommon to use any available livestock as a source of food. The future of the Lipizzans could be snuffed out in a matter of days.
Miraculously, a German officer, known only as Colonel Walter H., was captivated by the Liizzaner horses and felt that they must be saved at any cost. Risking his own life, he surrendered to the Second Mechanized US Cavalry Regiment and was taken to the regimental commander, Colonel Charles Reed. It happened that Col. Reed was a dedicated horseman and shared Col. H's view. The two quickly hatched a plan to liberate the Lipizzans. Col Reed quickly contacted his commander, General George S. Patton. Patton had become acquainted with the Lipizzans in Saint-Martin; the US army had been using the castle as their headquarters. Upon hearing Col. Reed's plea, Patton responded, "Get them. Make it fast!"
On May 15, 1945 the horses were evacuated via a long freight train through the Bohemian Forest to US occupied Bavaria. From there the entire herd was reunited and the future of the Lipizzan breed was assured.